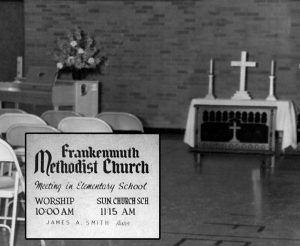 From its inception, Frankenmuth United Methodist Church has been a richly diverse congregation made up of persons from numerous faith backgrounds. In the early 1960’s, Methodists living in Frankenmuth, feeling a lack of Methodist community, began to meet in homes. In 1962, Reverend James Smith brought together sixty-eight charter members who met to worship in what is now List School.

1965 saw the building of a parsonage on seven and one-half acres of land purchased by the fledgling congregation. In 1968, the church’s first building phase was completed, and the congregation met at List School for the last time in November. Following that service, they then together walked to the new building for its consecration. 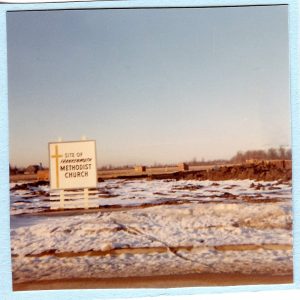 That same year, Frankenmuth Methodists celebrated their spirit of Christian unity by inviting the congregation of the newly formed Blessed Trinity Catholic Church to use the new building for their services. Before this, the Catholic congregation had been meeting in the high school gym. This continued until April 1976, when their facility on Tuscola Road was completed. The relationship had been so endearing for both congregations, that a permanent bond – a Covenant – between the two was signed in 1987 to assure continued prayerful fellowship. This bond has remained strong throughout the years, resulting in shared services and activities. The two congregations also support each other with prayers on a weekly basis.

In 1978, the sanctuary with additional office and meeting space was dedicated.  and most recently In 2003, the education addition with music facilities and increased gathering space was completed. 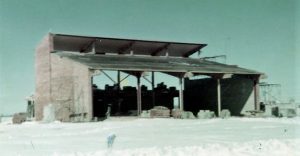 Throughout its 50 years, the congregation has recognized a call to service. From the simple beginnings of with a a monthly “Bread Pan” offering taken monthly. Literally Using metal bread pans as offering plates, the congregation directed funds to help alleviate hunger and serve those in need both locally and world-wide. These offerings continue monthly at FUMC to this day.

In 1998, the congregation took another step in its caring ministry. Stephen Ministry, an inter-denominational, Christian-based program, provides training to lay members offering one-on-one support services for those experiencing life crises such as hospitalization, retirement, financial setbacks, loss of a loved one or any similar situations. The Stephen Ministry continues to provide a valuable service to the congregation and community.

In 2004, under the direction of volunteer and originator Mary McEwen, the Clothesline Resale Shop opened, and would again include and endorse the ecumenical philosophies of FUMC by joining forces with several other churches in Frankenmuth.  Blessed Trinity Catholic Church, St. Lorenz Lutheran Church, St. John’s Lutheran Church, and the Bible Church. Any and all can purchase items from the store, with the profits being annually donated to local charities.

Another ecumenical step was taken when FUMC joined with other community churches in the CrossRoads Counseling Ministry program. This is a Christ-centered ministry which offers professional counseling and educational services for people with those needs.

Today, dozens of study groups, church programs, music opportunities, outreach endeavors, and mission activities engage the church family. Building on a living memory, faith and community is nurtured as we seek to live out our Christian witness.